You are here: Home1 / Blog2 / Lessons in Leadership from Sally Ride 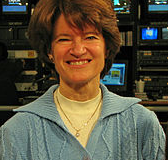 What lessons in leadership are left to us by Sally Ride, the first female American astronaut to be launched into space? She died July 23, 2012 at 61 of pancreatic cancer.

She was president and CEO of Sally Ride Science, a company she co-founded in 2001 to improve science education for kids, which she called a “business imperative for the country.” She wanted to encourage more young girls to pursue sciences and math studies.

Ride joined NASA in 1978 and, at the age of 32, became the first American woman to enter into low Earth orbit in 1983. In 1987, she left NASA to work at Stanford University‘s Center for International Security and Arms Control. She served on the investigation panels for two space shuttle disasters, Challenger and Columbia, the only person to serve on both. Ride remains the youngest American astronaut to be launched into space.

Shortly before her death, she was interviewed by Alison Beard for Harvard Business Review. Here are some excerpts:

First, just to step back, this really is a business imperative for the country. Our education system just isn’t producing the workforce that we need to compete globally. If you talk to just about any corporate leader in the tech sector, they will agree with that.

We’re also failing the kids in the system because we’re not providing them with the skills they need to succeed. Not only do we need the next generation of rocket scientists and environmental engineers, but we need to provide a good science, math, and technology background to all students.

By the time they graduate they’re going to need those skills just to get basic living-wage jobs and to be scientifically literate citizens who can make informed decisions about their health or environmental issues. So I think we need to change the way we teach science. There are certain scientific concepts that students need to understand. Let’s focus on those instead of having them memorize a set of facts.

I couldn’t resist highlighting the text I think applies not just to education but to business. What lessons in leadership can we learn from Ride’s inspirational life?

Learning doesn’t stop when students leave college. They simply transition to jobs where the real education begins. Instead of teachers or professors, they start learning from managers and bosses. They continue their education among peers, through participation in teamwork.

Sally Ride says that there are some serious gaps in the way we educate our young people in sciences. She dedicated her later years to inspiring others to stop that gap and start making education better, especially for girls. This is huge work, and in a life that was unfortunately cut too short, she made some headway.

The rest is up to us. If you’re a manager, do you recognize your dual role as teacher/leader? Ask yourself:

Ride felt that elementary teachers weren’t sufficiently educated in math or sciences. If we replace the term “science and math teachers” with “business managers,” the same principles are true:

We also need to significantly improve the quality of science and math teachers, particularly elementary teachers, who typically have very little background in science and so are not comfortable teaching it and don’t know how to really excite and engage kids. Unless you give students an appreciation for why this is important and why it is, by the way, really cool stuff, they’re going to drift away from it. So we need to give teachers a better background as they’re going through their training and with continuing professional development.

So many times people are promoted to managing positions because of their expertise and skills. We expect them to automatically know how to inspire engagement in people. It’s not going to happen without providing professional development and training.

Sally Ride wanted to encourage more gender diversity among technology jobs and so she worked at the root of the problem: a lack of inspiring education, especially for girls, at the elementary and middle school levels.

That same gender bias continues to exist at the executive levels, in spite of research that points to the benefits of having women at the top. A McKinsey report “Women Matter” (October 2007 ) showed that companies with gender diverse boards perform on average 50-100% better by a variety of financial indicators than single gender boards.

Bad Leadership and the Baboon in the Corner Office

Business Thinking for the Future: Are You a Fox or a Hedgehog?
Scroll to top