You are here: Home1 / Blog2 / Dogfish Head Brewery: What Happens When You Hire the Right People

About a week or two before our annual trip to the Delaware seashore, my husband starts getting excited. It’s not just the promise of sand, sun, and the boardwalks. You see, he’s a huge beer aficionado with his particular favorite being Dogfish Head Brewery. Dogfish Head Brewery is based in Milton, DE with a great brewpub very close to us in Rehoboth Beach. For him, and so many other craft brew lovers, this is their mecca.  This year, we were able to take a tour of their brewery where they make their strong, eclectic (or as they call them off-centered) ales.

Okay, so maybe we are a little nuts! We brew strange concoctions of beer, sell silly accessories with our name on it and have our own music group, The Pain Relievaz!

We like to keep it a little kooky and wacky around the Dogfish joint!

Driving up to the brewery, it’s impossible to miss the steampunk-inspired tree house that stands in front of the building.  They hold employee meetings here. 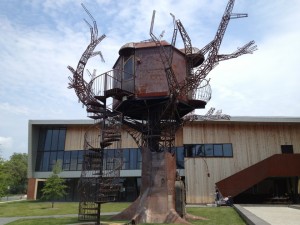 As we entered, we see the bocce ball courts alongside it where Dogfish regularly hosts games with other breweries or kicks back a few beers amongst the employees on Fridays. This is a business that projects its culture loud and strong, making it impossible NOT to have a good time with them!

Our tour guide was Pete Olsen, who introduced us to the Dogfish story, its origins, its culture, and its beers. From the get go, you saw that this kid has passion for his work. Pete regaled us with stories of where the tree house came from (direct from the playas of the 2007 Burning Man festival), owner Sam Calagione’s first forays into brewing and the invention of the first continuous hopping machine (a pail filled with hops on top of an electronic football machine that shook the hops continuously into the boil), and the numerous differences between craft beer and beer from the big producers like Miller and Anheuser-Busch.  Listening to Pete, he reminded me how much I love working with young (or young at heart) people who are overflowing with energy, enthusiasm, and ideas. There wasn’t an ounce of cynicism here; Pete was passionate about the company and its product.

In my work, I’ve had the pleasure of working with some creative, can-do folks such as developers (Sarge Kennedy, Anil Kumar, Dave Richardson, Malcolm Hyson) and QA guys (Frank Petracek) and so many others.  These are the type of folks that every business wants – passionate and full of ideas and “can-do” attitude.

When we talked to Pete following the tour, Ken and I were floored to find out he had only been with the company for about six weeks. He was so passionate about Dogfish and craft brews that you would have thought he had been working there for years. He had internalized the story and was so proud. It was obvious he lives and breathes it. This type of attitude can’t be found in just anyone but you can foster a culture that attracts people like this to your company by hiring for attitude and aptitude. Sometimes this means going outside the beaten path.

It got me thinking about how lucky Dogfish was in finding someone who is such a good fit, who immediately embraces the company culture. And I say “lucky” because hiring is often a 50-50 roll of the dice, no matter what systems are in place to select employees.

Like great art, we often rely on our intuitions when it comes to hiring the right people.  But there are some fundamentals. The best selection results from paying attention to the following three criteria:

Pete had just graduated with a degree in Economics and home-brewed on the side. That doesn’t exactly scream – sales and marketing at a brewery. Whoever hired Pete at Dogfish had asked the right questions. Developers that I’ve worked with in the past have had diverse educational majors from Art History to Philosophy. Sometimes, these types of experience can actually bring something extra to the table, yet how many companies would filter them out for not having a requisite Business Administration or Computer Science degree?

If you’re a business leader, you can see to it that:

It was evident that Pete loved his job and the company. Pete was aligned with the Dogfish culture and its mission and vision.  And that alignment turned into a wonderful customer experience for my husband and me.

How TOFU Can Boost Your Qualified Leads

Smart Companies Are Starting to Get Social

How to Build an Authoritative Google Map Maker Profile 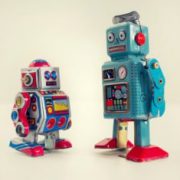 3 Easy Ways to Automate Your Marketing